It is funny how in life things do indeed come full circle.

Instead of pursuing still photography, from the get go, by accepting admittance to Rochester Institute of Technology’s prestigious photography program, I opted to attend Boston University’s College of Communication.  After graduating from BU with a degree in video & film production, I worked in that field for the six years.  Although I enjoyed my job as the videographer for Boston’s daily news program, Neighborhood Network News, it wasn’t where my heart was. 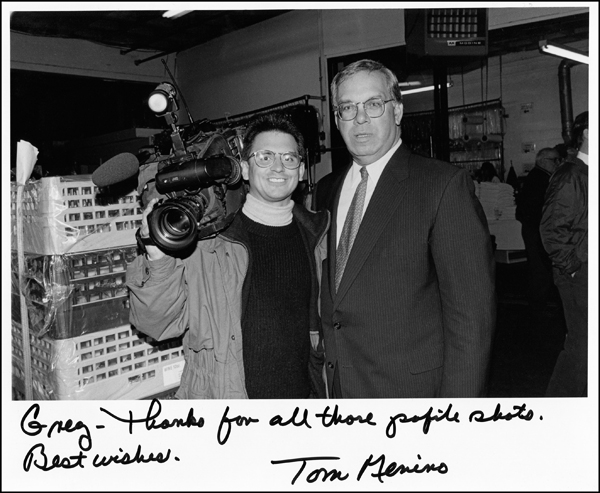 Me with Boston Mayor Thomas Menino. Notice my turtleneck and heavy winter coat!

When I decided to follow my true passion of still photography, I decided to attend the equally prestigious Southeast Center for Photographic Studies in Daytona Beach.  And, yes, I have to admit that the warm, sunny weather was an added bonus that made my decision to attend the program that much easier.

But I digress.  Over the past 15 years, I have seen the rapid march of technology.  When I started at the Daytona Beach News-Journal we were still shooting film.  Within three years, the newspaper’s photo department started converting to digital technology.

Likewise, within a couple years of owning Pach Adams,  we converted to all digital.  However, technology has not stopped there.  Now, cell phones have cameras…  computers have webcams…  newspapers and magazines have video clips on their websites…  many of today’s cameras come with video capabilities…  and, in fact, some television productions are now being shot with cameras like the Canon 7D which is a DSLR.

The line between still and moving pictures is becoming blurred.  Before we know it, there may not be DSLRs and camcorders;  instead, we may have all in one devices.

With the hybridization of the industry, Angel & I are in the process of learning the how to use this new technology and software, while brushing up on old techniques learned in Boston.

While I thought that I was moving away from video,  I guess I have little choice but to let it pull me back in.  It is a good thing that I am prepared.

And so things come full circle.

This entry was posted in News. Bookmark the permalink.